My American client, William E. “Bill” Cole, recently published, in two articles, the initial findings from our English Origins research project in the prestigious American journal, the Mayflower Descendant. The first article, “Jane Clarke: A Strong Woman. The English Origins of William Collier’s wife,” details the dramatic findings of a special English woman who overcame tragedies to make significant contributions to the ultimate success of the Plymouth Colony in America’s New England. She and her family emigrated there in 1633. Although many prestigious and diligent researchers searched for many years, we were the first to break through the genealogical barriers to identify her birth, her parents, and discover previously unknown children. The article may be downloaded as a PDF file directly from my client’s website for a modest fee at –https://www.passionategenealogist.org/jane-clarke-a-strong-woman-the-english-origins-of-william-colliers-wife/

The second article, “The English Origins of Job, John, Daniel, and Ruth Cole,” details his family that emigrated to America in 1633. Although many prestigious and diligent researchers searched for these ancestors over many years, we were the first to break through the genealogical barriers. The article may be downloaded as a PDF file directly from his website for a modest fee at https://www.passionategenealogist.org/english-origins-of-job-john-daniel-and-ruth-cole/ 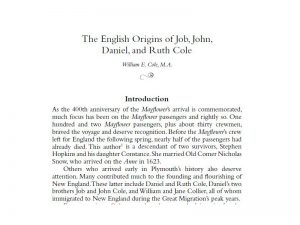 ICON Theatre in Chatham has been working recently with Archives Alive on a community history project called Cabbage Island. The project is based on the local history of Luton in Chatham in Kent and is funded by the Heritage Lottery Fund.
Archives Alive trained and mentored volunteers to research and produce a travelling exhibition, which will visit the following venues:

For more details of the Cabbage Island Project see https://icontheatre.org.uk/community-projects/

To coincide with the centenary of the start of the Battle of the Somme Alleyn’s School in Dulwich has launched its commemorative World War One website     http://ww1.alleyns.org.uk
The site explores the individual stories of boys from Alleyn’s who fought in the First World War and remembers both those who survived as well as those who died.
It can be tempting to see WW1 as one single event or as one continuous trench across France. The School’s work on the stories of individuals showed how boys from one area of South East London joined Airforce, Navy and Army regiments all over the UK and indeed the world. Some boys fought for the Australian and Canadian armies while others joined the local Cyclist Corps. Each boy had totally different experiences of the same war.
The website was accompanied by an onsite exhibition which was held on 2nd July 2016, with additional remembrance for the eleven Alleyn’s Old Boys who were killed on the first day of the Somme on 1st July 1916 being:

A key feature of the Alleyn’s WW1 commemoration was the learning opportunities available to current pupils in studying the war through the eyes of boys from the same school one century ago. Year 9 History classes undertook research into the boys who went to war via their Army Service and Pension Records, while Year 9 English studied the war poets and 6 pupils created a commemorative tree in Art that presented a sample of the names of the 1900 Alleyn’s boys who fought on a tree made from broken art easels.

All of this work is presented on the site  ww1.alleyns.org.uk

The Heberden Collection (reference SA/HEB) was given by the British Society for Rheumatology to the Wellcome Library in March 2012. It has recently been catalogued at reference SA/HEB and while it mostly relates to rheumatism and arthritis it also includes a collection of historic medical manuscripts, which was put together by William Copeman. As well as being an influential rheumatologist Copeman was interested in the history of medicine and collected documents on a variety of medical subjects. One such document is a description of ‘Peter the Wildboy’.

The copy of the writing at SA/HEB/A/2/3/7 is from the parish register of Northchurch in Hertford and the original of this register is held by Hertfordshire Archives and Local Studies Service with the reference DP/74/1/8. It describes how a boy aged around 12 years of age was found in 1725 living wild in the German forests around Hamelon, near Hanover. He was wearing the remains of a shirt collar and had been eating leaves, berries and bark from the forest. He was found by a hunting party of George I and was taken to the UK in 1726 and put in to the care of Dr Arbuthnot so that he could receive a proper education.

It became apparent that Peter had, what today would be called, learning disabilities and although he had a willing personality he never learned to speak or retain his education. Because of this he was sent to live with the Fenn family of Northchurch, where it is clear from this document that he was held in great affection and protection by those who knew him.

When Peter was in London his arrival caused a great deal of interest. A Wikipedia entry exists for Peter and the entry shows that Peter was the subject of medical curiosity, satire, rumour, art and mystery. A portrait was painted of Peter by William Kent at Kensington Palace, which showed Peter to have distinct facial features. In 2011 this portrait was used to suggest that Peter had Pitt–Hopkins syndrome.

However the document copied from the Northchurch parish register may offer conflicting evidence. The author of the document emphasises that it was written by people who knew Peter well and that Peter had no facial deformities. It states that

“Peter was well made and of the middle size. His countenance had not that of an Idiot, nor was there anything particular in his form except that two of his fingers of his left hand were united by a web up to the middle joint”

The document also states that it was written deliberately to refute the suppositions that had been made about Peter in London by
“many men of some eminence in the literary world have in their works published strange opinions, and ill founded conjectures about him” and that “this short and true account of Peter is recorded in the Parish Register by one who constantly resided —- in the neighbourhood and had daily opportunities of seeing and observing him”.

Peter’s lack of ability to acquire speech, his apparent ‘normal’ appearance and intellectual disability may suggest that Peter actually had a condition on the autistic spectrum. If so, this document provides an 18th century description of a condition that was only first described in its most severe form in the 1950s, and in milder forms from the 1980s onwards. Knowledge about the true nature of the autistic spectrum as a neurological, genetic, verbal language learning difficulty is only just beginning to be understood now in the 21st century.